TL;DR: Our approach distills the residual information of one model with respect to another's and thereby enables translation between fixed off-the-shelve expert models such as BERT and BigGAN without having to modify or finetune them.

Related Work on Understanding and Disentangling Latent Representations with INNs 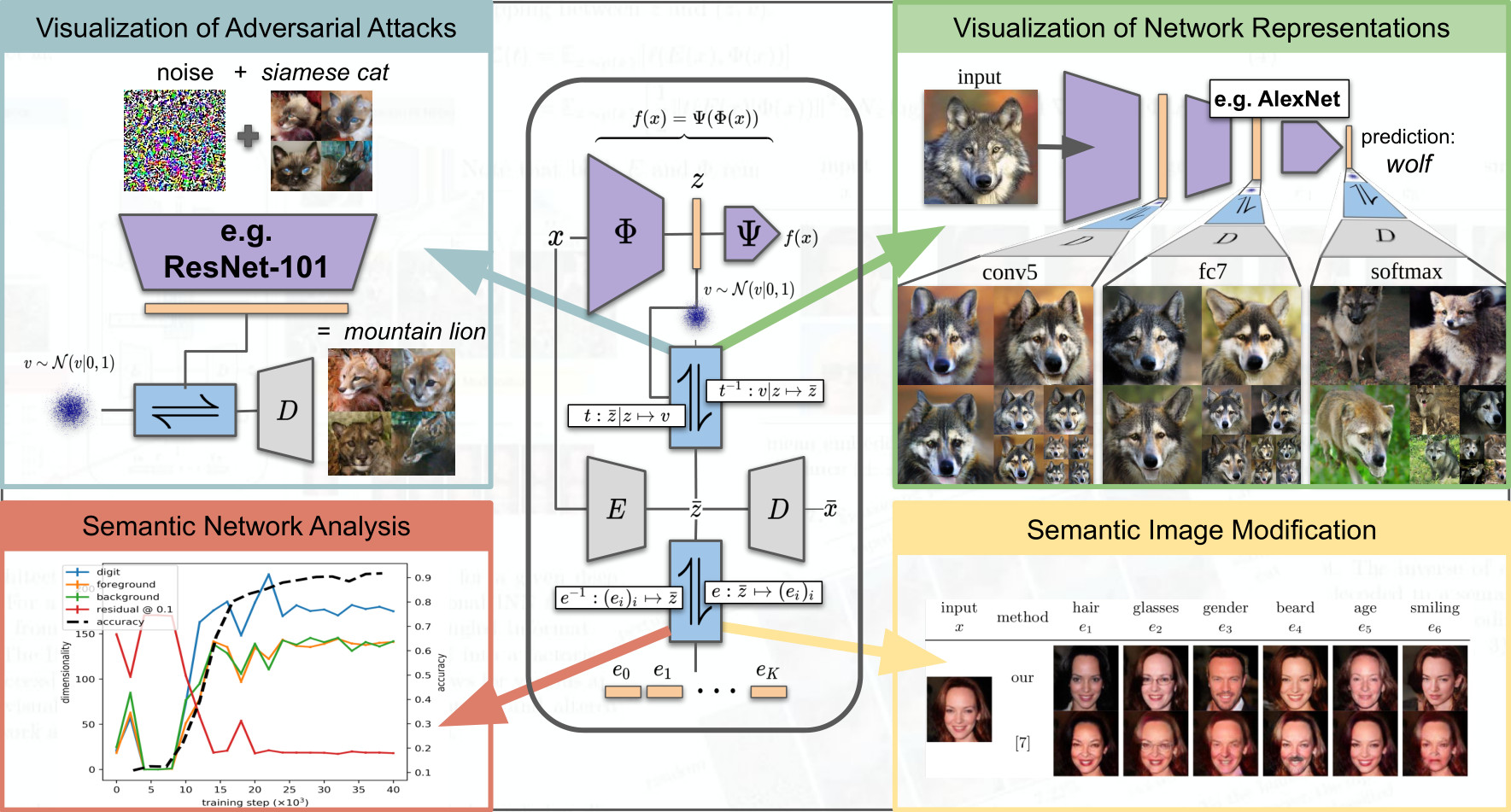 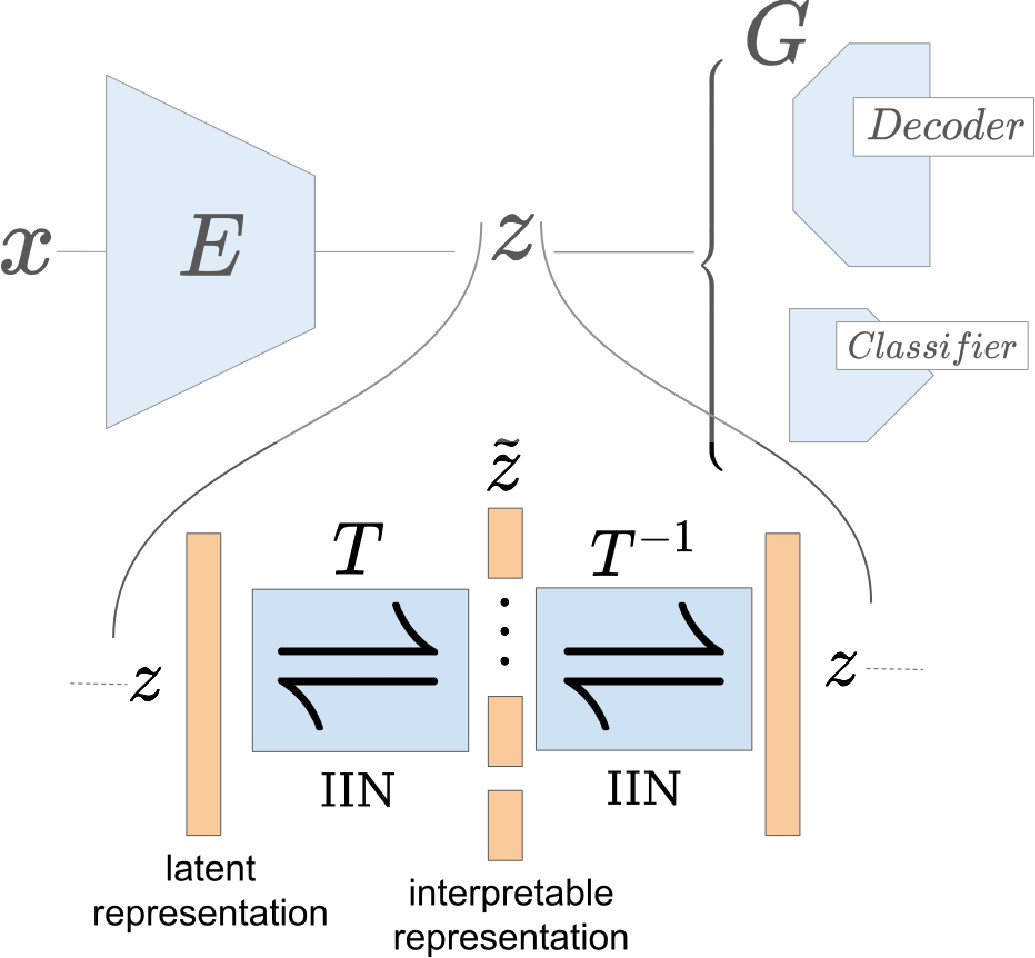 Neural networks have greatly boosted performance in computer vision by learning powerful representations of input data. The drawback of end-to-end training for maximal overall performance are black-box models whose hidden representations are lacking interpretability: Since distributed coding is optimal for latent layers to improve their robustness, attributing meaning to parts of a hidden feature vector or to individual neurons is hindered. We formulate interpretation as a translation of hidden representations onto semantic concepts that are comprehensible to the user. The mapping between both domains has to be bijective so that semantic modifications in the target domain correctly alter the original representation. The proposed invertible interpretation network can be transparently applied on top of existing architectures with no need to modify or retrain them. Consequently, we translate an original representation to an equivalent yet interpretable one and backwards without affecting the expressiveness and performance of the original. The invertible interpretation network disentangles the hidden representation into separate, semantically meaningful concepts. Moreover, we present an efficient approach to define semantic concepts by only sketching two images and also an unsupervised strategy. Experimental evaluation demonstrates the wide applicability to interpretation of existing classification and image generation networks as well as to semantically guided image manipulation.

Figure 1: BERT [15] to BigGAN [4] transfer: Our approach enables translation between fixed off-the-shelve expert models such as BERT and BigGAN without having to modify or finetune them.

Figure 2: Proposed architecture. We provide post-hoc model fusion for two given deep networks f = Φ ◦Ψ and g = Θ ◦ Λ which live on arbitrary domains Dx and Dy . For deep representations zΦ = Φ(x) and zΘ = Θ(y), a conditional INN τ learns to transfer between them by modelling the ambiguities w.r.t. the translation as an explicit residual, enabling transfer between given off-the-shelf models and their respective domains.

Figure 5: Translating different layers of an expert model f to the representation of an autoencoder g reveals the learned invariances of f and thus provides diagnostic insights. Here, f is a segmentation model, while g is the same AE as in Sec. 4.2. For zΦ = Φ(x), obtained from different layers of f , we sample zΘ as in Eq. (7) and synthesize corresponding images Λ(zΘ).

Figure 7: In (a), a segmentation representation Φ(x) is translated under the guidance of the residual v = τ−1(Θ(y)|Φ(y)) obtained from exemplar y. In (b), Φ is the same as Θ, but applied after a spatial deformation of its input such that τ learns to extract a shape representation into v, which then controls the target shape.

Figure 8: Unpaired Transfer: Bringing oil portraits and animes to live by projecting them onto the FFHQ dataset (column 1 and 2, respectively). Column 3 visualizes the more subtle differences introduced when translating between different datasets of human faces such as FFHQ and CelebA-HQ. Column 4 shows a translation between the more diverse modalities of human and animal faces. See also Sec. 4.3 and D.

Table 2: Comparison of computational costs for a single training run of different models. Energy consumption of a Titan X is based on the recommended system power (0.6 kW) by NVIDIA5, and energy consumption of eight V100 on the power (3.5 kW) of a NVIDIA DGX-1 system6. Costs are based on the average price of 0.216 EUR per kWh in the EU7, and CO2 emissions on the average emissions of 0.296 kg CO2 per kWh in the EU8.

Figure 9: Unsupervised disentangling of shape and appearance. Training our approach on synthetically deformed images, τ learns to extract a disentangled shape representation v from y, which can be recombined with arbitrary appearances obtained from x. See also Sec. C.

Figure 10: Additional examples for unpaired translation between human and animal faces as in Fig. 8. Our approach naturally provides translations in both directions (see Sec. D). Inputs are randomly choosen test examples from either the human or the animal data and translated to the respective other one.

Figure 11: Additional examples for unpaired translation of Oil Portraits to FFHQ/CelebA-HQ and Anime to FFHQ/CelebA-HQ. Here, we show samples where the same v is projected onto the respective dataset.

Figure 12: Model diagnosis compared to a MLP for the translation. Synthesized samples and FID scores demonstrate that a direct translation with a multilayer perceptron (MLP) does not capture the ambiguities of the translation process and can thus only produce a mean image. In contrast, our cINN correctly captures the variability and produces coherent outputs.

Figure 13: Additional examples for exemplar-guided image-to-image translation as in Fig. 7a.

Slides from our NeurIPS 2020 oral presentation.